Cloud service adoption continues to grow, as traditional IT vendors react to market demand. Total spending on IT infrastructure products for deployment in cloud environments is forecast to reach $52.3 billion in 2018 — that's year-over-year growth of 10.9 percent, according to the latest worldwide market study by International Data Corporation (IDC).

Public cloud data centers will account for a majority of this spending, 65.9 percent, growing at the fastest annual rate of 11.3 percent. Off-premises private cloud environments will represent 13 percent of cloud IT infrastructure spending, growing at 12 percent year over year.

On-premises private clouds will account for 61.7 percent of spending on private cloud IT infrastructure and will grow 9.1 percent year-over-year in 2018.

"Growing expansion of digital transformation initiatives enables further adoption of cloud-based solutions around the globe. This will result in a continuous shift in the profile of IT infrastructure buyers. SaaS, PaaS, and IaaS offerings address a broad range of business and IT needs of enterprises from 'lift-and-shift' to emerging workloads," said Natalya Yezhkova, research director at IDC.

This latest decline represents a faster share loss than in the previous three years. Moreover, the growing share of cloud environments in overall spending on IT infrastructure is common across all regions of the world. 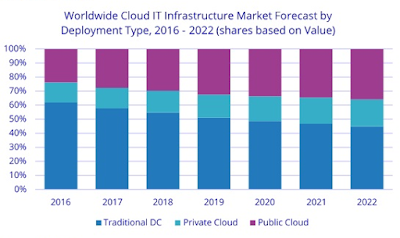 In cloud IT environments, spending in all technology segments, except for storage platforms, is forecast to grow at double digit rates in 2018. Ethernet switches and compute platforms will be the fastest growing at 20.9 percent and 12.4 percent, respectively, while spending on storage platforms will grow 6 percent. Investments in all three technologies will increase across all cloud deployment models – public cloud, private cloud off-premises, and private cloud on-premises.

Public cloud datacenters will account for 83.6 percent of this amount growing at a 10.6 percent CAGR while spending on off-premises private cloud infrastructure will increase at a CAGR of 11.4 percent.

Outlook for cloud IT infrastructure growth

Spending on on-premises private cloud IT infrastructure will grow at a 11.5 percenet CAGR, while spending on non-cloud IT (on-premises and off-premises combined) will decline at a 2.7 percent CAGR during the same period.

Traditional IT vendors must act now to assure their survival in the evolving domain of hyperscale multi-cloud service offerings, and prepare for the predictable reduction in demand for legacy data center infrastructure. New momentum this year signifies the acceleration of a pivotal transformation in the shift to a hybrid multi-cloud era.

Now That Wellness Apps and Telemedicine Are Here, Let's See If They Work

Messenger: How to See All of the Pinned Messages in a ChatBrandy Shaul

Instagram: How to Use the Black History Month Chat ThemeBrandy Shaul

Messenger: How to See All of the Pinned Messages in a ChatBrandy...

Instagram: How to Use the Black History Month Chat ThemeBrandy Shaul