Editor’s note: Today marks the first installment in a seven-part video and blog series from Google Developer Advocate Sandeep Dinesh on how to get the most out of your Kubernetes environment. Today he tackles the theory and practicalities of keeping your container images as small as possible.

Docker makes building containers a breeze. Just put a standard Dockerfile into your folder, run the docker ‘build’ command, and shazam! Your container image is built!

The downside of this simplicity is that it’s easy to build huge containers full of things you don’t need—including potential security holes.

In this episode of “Kubernetes Best Practices,” let’s explore how to create production-ready container images using Alpine Linux and the Docker builder pattern, and then run some benchmarks that can determine how these containers perform inside your Kubernetes cluster.

The process for creating containers images is different depending on whether you are using an interpreted language or a compiled language. Let’s dive in!

Interpreted languages, such as Ruby, Python, Node.js, PHP and others send source code through an interpreter that runs the code. This gives you the benefit of skipping the compilation step, but has the downside of requiring you to ship the interpreter along with the code.

Luckily, most of these languages offer pre-built Docker containers that include a lightweight environment that allows you to run much smaller containers.

Let’s take a Node.js application and containerize it. First, let’s use the “node:onbuild” Docker image as the base. The “onbuild” version of a Docker container pre-packages everything you need to run so you don’t need to perform a lot of configuration to get things working. This means the Dockerfile is very simple (only two lines!). But you pay the price in terms of disk size— almost 700MB!

By using a smaller base image such as Alpine, you can significantly cut down on the size of your container. Alpine Linux is a small and lightweight Linux distribution that is very popular with Docker users because it’s compatible with a lot of apps, while still keeping containers small.

Luckily, there is an official Alpine image for Node.js (as well as other popular languages) that has everything you need. Unlike the default “node” Docker image, “node:alpine” removes many files and programs, leaving only enough to run your app.

The Alpine Linux-based Dockerfile is a bit more complicated to create as you have to run a few commands that the onbuild image otherwise does for you.

But, it’s worth it, because the resulting image is much smaller at only 65 MB!

Compiled languages such as Go, C, C++, Rust, Haskell and others create binaries that can run without many external dependencies. This means you can build the binary ahead of time and ship it into production without having to ship the tools to create the binary such as the compiler.

With Docker’s support for multi-step builds, you can easily ship just the binary and a minimal amount of scaffolding. Let’s learn how.

Let’s take a Go application and containerize it using this pattern. First, let’s use the “golang:onbuild” Docker image as the base. As before, the Dockerfile is only two lines, but again you pay the price in terms of disk size—over 700MB!

The next step is to use a slimmer base image, in this case the “golang:alpine” image. So far, this is the same process we followed for an interpreted language.

Again, creating the Dockerfile with an Alpine base image is a bit more complicated as you have to run a few commands that the onbuild image did for you.

But again, the resulting image is much smaller, weighing in at only 256MB!

However, we can make the image even smaller: You don’t need any of the compilers or other build and debug tools that Go comes with, so you can remove them from the final container.

Let’s use a multi-step build to take the binary created by the golang:alpine container and package it by itself.

Would you look at that! This container is only 12MB in size!

While building this container, you may notice that the Dockerfile does strange things such as manually installing HTTPS certificates into the container. This is because the base Alpine Linux ships with almost nothing pre-installed. So even though you need to manually install any and all dependencies, the end result is super small containers!

Note: If you want to save even more space, you could statically compile your app and use the “scratch” container. Using “scratch” as a base container means you are literally starting from scratch with no base layer at all. However, I recommend using Alpine as your base image rather than “scratch” because the few extra MBs in the Alpine image make it much easier to use standard tools and install dependencies.

Where to build and store your containers

Platforms like Google Kubernetes Engine can securely pull images from Google Container Registry without any additional configuration, making things easy for you!

In addition, Container Registry gives you vulnerability scanning tools and IAM support out of the box. These tools can make it easier for you to secure and lock down your containers.

People claim that small containers’ big advantage is reduced time—both time-to-build and time-to-pull. Let’s test this, using containers created with onbuild, and ones created with Alpine in a multistage process!

Building images on a large machine

For the first test, I am going to build using a pretty beefy laptop. I’m using our office WiFi, so the download speeds are pretty fast!

For each build, I remove all Docker images in my cache.

The build takes about 10 seconds longer for the larger container. While this penalty is only paid on the initial build, your Continuous Integration system could pay this price with every build.

The next test is to push the containers to a remote registry. For this test, I used Container Registry to store the images.

Well this was interesting! Why does it take the same amount of time to push a 12MB object and a 700MB object? Turns out that Container Registry uses a lot of tricks under the covers, including a global cache for many popular base images.

Finally, I want to test how long it takes to pull the image from the registry to my local machine.

At 20 seconds, this is the biggest difference between using the two different container images. You can start to see the advantage of using a smaller image, especially if you pull images often.

You can also build the containers in the cloud using Container Builder, which has the added benefit of automatically storing them in Container Registry.

So again, there is a small advantage to using the smaller image, but not as dramatic as I would have expected.

So is there an advantage for using smaller containers? If you have a powerful laptop with a fast internet connection and/or Container Builder, not really. However, the story changes if you’re using less powerful machines. To simulate this, I used a modest Google Compute Engine f1-micro VM to build, push and pull these images, and the results are staggering!

For example, let’s say you have a three-node cluster, and one of the node crashes. If you are using a managed system like Kubernetes Engine, the system automatically spins up a new node to take its place.

However, this new node will be completely fresh, and will have to pull all your containers before it can start working. The longer it takes to pull the containers, the longer your cluster isn’t performing as well as it should!

This can occur when you increase your cluster size (for example, using Kubernetes Engine Autoscaling), or upgrade your nodes to a new version of Kubernetes (stay tuned for a future episode on this).

We can see that the pull performance of multiple containers from multiple deployments can really add up here, and using small containers can potentially shave minutes from your deployment times!

Aside from performance, there are significant security benefits from using smaller containers. Small containers usually have a smaller attack surface as compared to containers that use large base images.

I built the Go “onbuild” and “multistage” containers a few months ago, so they probably contain some vulnerabilities that have since been discovered. Using Container Registry’s built-in Vulnerability Scanning, it’s easy to scan your containers for known vulnerabilities. Let’s see what we find.

Let’s drill down and see which issues the larger container has. 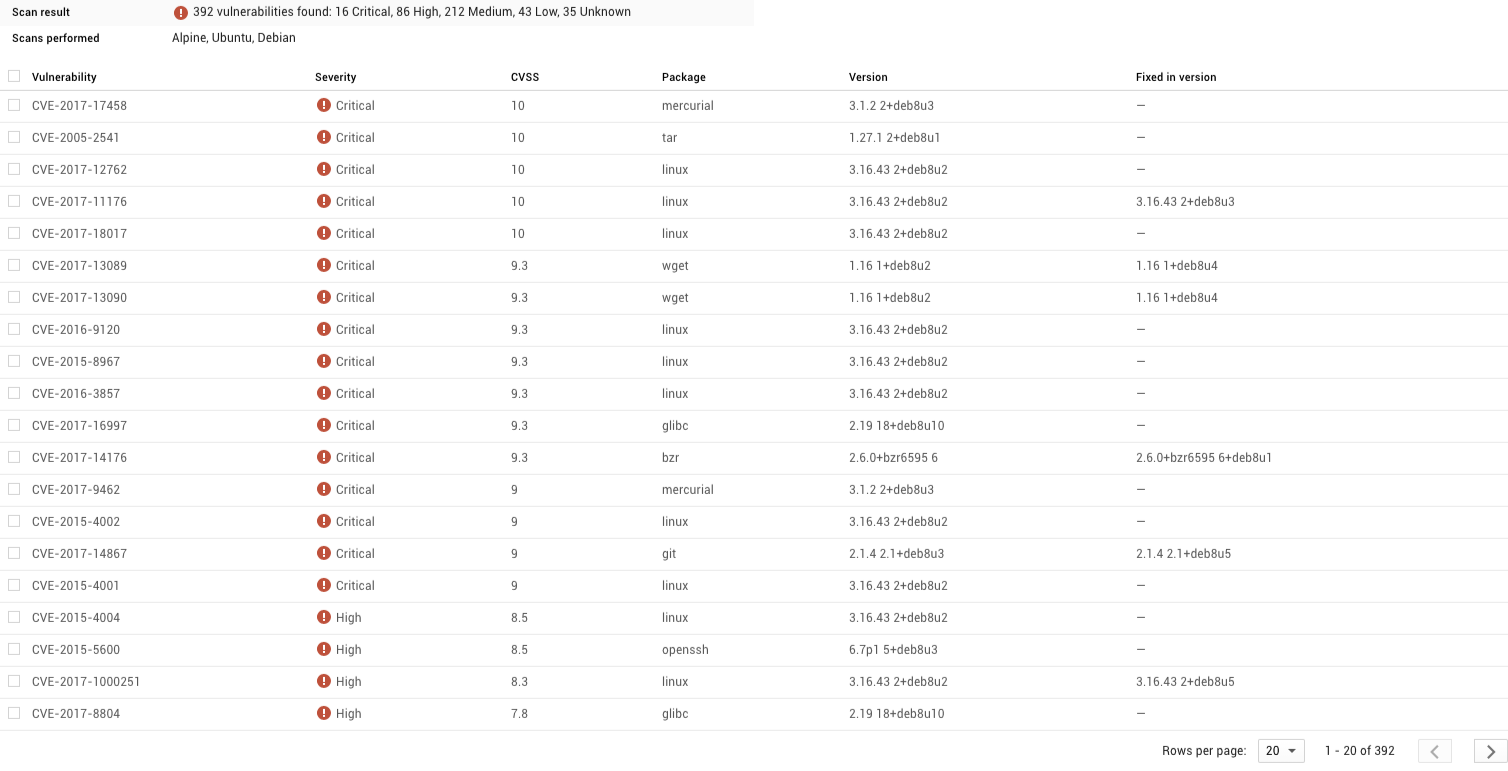 You can see that most of the issues have nothing to do with our app, but rather programs that we are not even using! Because the multistage image is using a much smaller base image, there are just fewer things that can be compromised.

The performance and security advantages of using small containers speak for themselves. Using a small base image and the “builder pattern” can make it easier to build small images, and there are many other techniques for individual stacks and programming languages to minimize container size as well. Whatever you do, you can be sure that your efforts to keep your containers small are well worth it!

Check in next week when we’ll talk about using Kubernetes namespaces to isolate clusters from one another. And don’t forget to subscribe to our YouTube channel and Twitter for the latest updates.


If you haven’t tried GCP and our various container services before, you can quickly get started with our $300 free credits.

Messenger Kids: How to Change a Chat’s ColorBrandy Shaul

The value of wind energy

Calculating the coming aluminum demand for solar panels and how to mitigate...

Messenger Kids: How to Change a Chat’s ColorBrandy Shaul

Instagram to Take Action on Potentially Problematic Posts That Don’t Violate Its...

The value of wind energy