Full-year sales surpassed $12.5 billion in 2017, representing a 9.4 percenet increase over the previous year and the first time the market surpassed $12 billion in a calendar year.

Growing demand drove the total market value. While not all market segments increased during the year, those that did grow were able to provide considerable benefits related to the most core infrastructure challenges facing today's data centers. 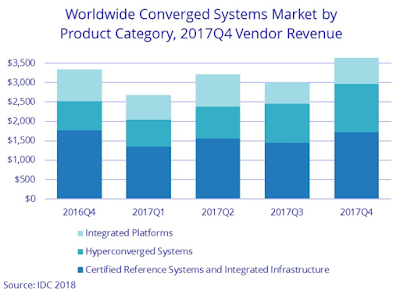 A key characteristic of hyperconverged systems that differentiate these solutions from other integrated systems is their scale-out architecture and their ability to provide all compute and storage functions through the same x86 server-based resources. Market values for all three segments includes hardware and software but excludes services and support.

The certified reference systems & integrated infrastructure market generated $1.7 billion in revenue during the fourth quarter, which represents a 3.4 percent year-over-year decline and 47.1 percent of the total converged systems market value.

Integrated platforms sales declined 18.1 percent year over year during the fourth quarter of 2017, generating revenues of $675.5 million. This amounted to 18.6 percent of the total converged systems market value.

Microsoft teams up with Electric Imp for secure IoT

The key challenges of migrating databases to the cloud: Planning and performance