Hyperscale cloud service providers continue to leverage their low-cost advantage to drive growth. According to the latest worldwide market study by Canalys, Google Cloud was the fastest-growing cloud infrastructure vendor last year – up more than 90% year on year – increasing its share of the total market from 6% in 2017 to 8% in 2018.

The top four hyperscale cloud service providers accounted for 61% of the total market in 2018. Amazon Web Services (AWS) remained the leader on 32%, followed by Microsoft Azure with 17%, Google Cloud in third place with 8% and Alibaba Cloud with 4%.

Canalys reports that hyperscale cloud infrastructure services are in a period of sustained growth, with spending up 46% in 2018 to more than $80 billion. Expenditure is also forecast to surpass $143 billion in 2020.

More businesses are deploying a hybrid multi-cloud strategy, integrating multiple providers with their existing on-premises IT infrastructure. Canalys estimates 30% of cloud infrastructure services spend, just over $24 billion, went through the IT channel of distributors, resellers, service providers and systems integrators in 2018.

The channel will play a vital role for the cloud service providers, in terms of boosting their customer reach, from both a sales and technical perspective. But each of the hyperscale cloud service provider titans current partner reach, engagement and program maturity differs — with Google Cloud trailing both AWS and Microsoft Azure in all areas. Alibaba Cloud is further back, behind the leaders. 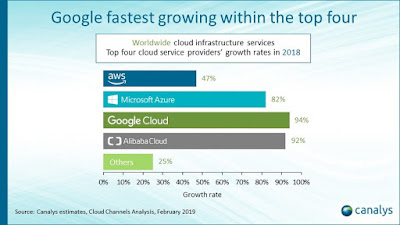 Canalys estimates the top three providers represented 65% ($16 billion) of the channel's total cloud infrastructure services business in 2018. Microsoft manages one of the largest channel ecosystems in the technology sector and its Cloud Solution Provider (CSP) program is the most mature among the cloud titans, according to the Canalys assessment.

Approximately 74% of revenue from Azure is estimated to come via its partners, which is by far the highest percentage in the sector. In contrast, AWS channel business accounts for around 15%, though its reach is growing rapidly, AWS having recruited over 35,000 partners to date, with hundreds a month wanting to join its partner program.

Canalys estimates that Google Cloud's channel business accounts for just over 25% of its $7 billion cloud infrastructure revenue. In spite of Google Cloud's rapid growth, its channel reach is relatively small, though it is trying a differentiated approach by being more focused on specific applications and verticals.

An estimated 13,000 partners have joined its partner program, of which just over 100 have achieved the highest-tier Premier Partner status, while less than a third of those have achieved a Specialization Partner designation.

In a recent Candefero channel survey, 20% of respondents think there is huge potential to working with Google Cloud, while 22% said they will work with other cloud service providers instead. Cloud computing service channel partners will continue to align with the market leaders.

That said, 44% of partners were intrigued to know more about partnering with Google. Their new leadership brings the experience of working with the largest enterprise customers. But to date, Google has not captured the broader channel where AWS and Microsoft are being more proactive. 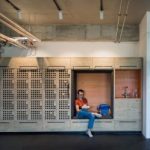 The flexible solution to workplace loneliness 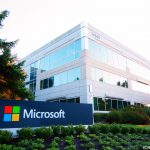 10 ways enterprises are getting results from AI strategies

Not clouding the issue: How to achieve clarity on migration goals