Editor’s note: This is the fourth in a series of blog posts on container security at Google. You can find the other posts in the series here.

Security is a crucial factor in deciding which public cloud provider to move to—if at all. Containers have become the standard way to deploy applications both in the public cloud and on-premises, and Google Kubernetes Engine implements several best practices to ensure the security and privacy of your deployments. In this post, we’ll answer some of your questions related to container networking security of Kubernetes Engine, and how it differs from traditional VM networking security.

Kubernetes’ design greatly simplifies networking by abstracting management of load balancer and firewall configurations. In addition, Kubernetes Engine also offers a variety of network security tools to help you lock down your network:

Google Cloud offers a wealth of services and functionality to help you lock down the network connected to your Kubernetes Engine clusters. Let’s drill down into each of these offerings a bit further.

We recently announced the beta availability of Kubernetes Engine Private Clusters, allowing you to deploy clusters privately as part of your Google VPC and your nodes with only private RFC 1918 IP addresses. Private Clusters ensures network segmentation, reducing the scope and complexity of PCI-DSS compliance. Learn more about the specific segmentation requirements for PCI DSS. 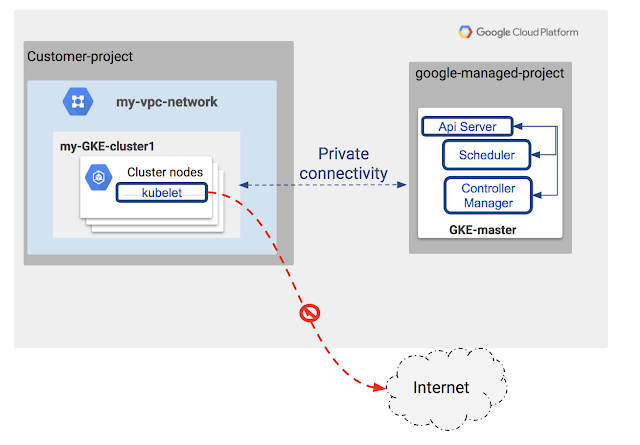 Traditional VPCs are regional connected silos that must be stitched together through either the public internet or VPN, leading to a sprawl of connections to your on-premises deployment. Google’s VPC offers global connectivity for all your GCP workloads (e.g. Compute Engine VMs and Kubernetes clusters), removing the need for public internet routing or extra VPNs.

Kubernetes Network Policies allow you to restrict pod-to-pod traffic based on high-level policy specification. In Kubernetes Engine, these are supported using the Calico Network Plugin, created in collaboration with Tigera. Network policies help prevent an attacker from moving laterally. For example, using a network policy, a compromised front-end service can be restricted from communicating with a back-end service such as billing, giving you peace of mind through micro-segmentation of your services in the cloud. By restricting access to your services, this provides a building block to securing access and isolation in a multi-tenant microservices environment. 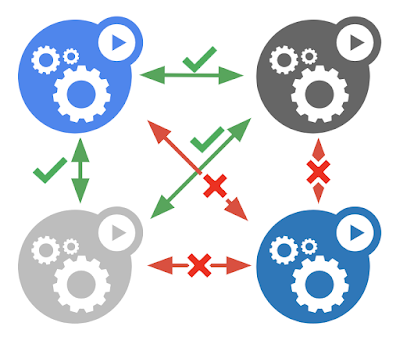 GCP also allows you to set up firewall rules between your Kubernetes Engine cluster nodes within your VPC network. These rules apply to egress traffic from instances and ingress traffic to instances in the network. Set up firewalls for your deployment today. Learn more about setting up network policies.

Encrypt data in transit when it leaves a physical boundary

Securely connect to other Google Cloud services and your GCP deployments

Private Google Access allows private RFC 1918 connectivity across VPC networks on a subnet level to other critical Google services such as Cloud Spanner, Cloud Pub/Sub, Cloud Dataproc and Cloud Storage. This allows you to securely connect to Google’s managed services without exposing your traffic to the public internet.

For connecting your on-premises infrastructure to GCP, your options include:

Secure your application traffic with Ingress and HTTPS

Our HTTP(S) and TCP load balancers are the result of expertise Google has gained running our services at scale. They scale up easily and offer protection against common attacks such as SYN floods, IP fragment floods, and port exhaustion. For more details, you can read the Best Practices for DDoS Protection and Mitigation on GCP whitepaper or watch the cloud networking blueprint for securing your workloads talk.

IoT Tech Expo: SoftwareAG on how to avoid becoming another statistic

How commodity trading and risk management relates to the cloud: A guide

How the changing security landscape is forcing cloud providers to respond

How commodity trading and risk management relates to the cloud: A guide

Why the cloud IT infrastructure market is set to reach $52.3bn in 2018